Last week I discovered over 3,000 copies of two of my books were shredded. They hadn’t just been put into a closeout status and sold for pennies before going out of print. No. These were specifically taken somewhere to be cut and stripped and reduced to confetti.

The two books were Marvelous and Wonder, the first two in a four-book series called The Books of Marvella. This series has already had a rough history since it was canceled by the publishing house midway through the publishing schedule due to the lack of sales. I paid money to print the third book, Awe, which I won’t recoup for some time. I plan to publish the fourth and final book, Glory, especially because I already wrote it and the story isn’t not even half complete without it.

Naturally I would have liked some or all of those copies. Especially since they were literally being destroyed. And since I will be selling the series as a foursome once I publish Glory.

Heck–I could have used Marvelous as bait to capture some readers. I could have given it away for free.

3,000 copies. Shredded. I didn’t take the news so well. Considering the timing, it felt brutal and also symbolic.

It took five days or so before I forced myself to let it go. And to also realize the obvious: they’re just paper. That’s all those books are.

I remember when my first book got published the summer of 2000. I had written and finished seven novels before landing a contract with this one. At the time, I was all-consumed with trying to get something published. I worked hard. I’m not some incredibly gifted and brilliant writer. I grew up wanting to write but didn’t read tons of books. I had a lot to learn (still do). I was fortunate to get a job in publishing, and I did so because I really wanted to learn the business and get published. So finally, the day came.

I had built it up to insane expectations. As if trumpets in the Heavens were going to sound. As if I was going to hold “baby” for the first time. Books are your babies in some way. But they really aren’t, as I’ve learned having three girls. The don’t compare, to be honest.

The Promise Remains was published by Tyndale House Publishers, where I worked from 1994 to 2007. So I was able to find out the moment the books came in from the printer. I remember hearing from someone in production that they had arrived, so I called the warehouse immediately to see if they could locate them.

“Yeah, they’re right over there,” a young guy in the warehouse said in a nonchalant way.

Imagine someone saying that about your daughter. “Yeah. She’s right over there. I guess. I don’t know. It’s just another baby. We see a lot of them.

I didn’t tell the guy it was my book. I ran down the stairs and across the parking lot to get a few copies. To see what it finally looked like. A hardcover book! With my name on it!

When I arrived slightly out of breath, I found the man I’d spoken with and asked him where the books were. He brought me over to a pallet of boxes and we both stood there for a moment, staring at them.

“I don’t know what happened to this,” he said, still casual but also now curious.

It looked like a forklift had driven over the cases of books. Two or three cases were opened and smushed at the same time. Books had fallen out, their jacket sleeves torn, pages even ripped. The first copy I ever picked up was warped and wrinkled.

Holding my first book in print, I realized that being published wasn’t the be all and end all I thought it would be.

Soon I would harbor another deep-rooted goal and dream: having a shelf of my own books and being able to write full-time. 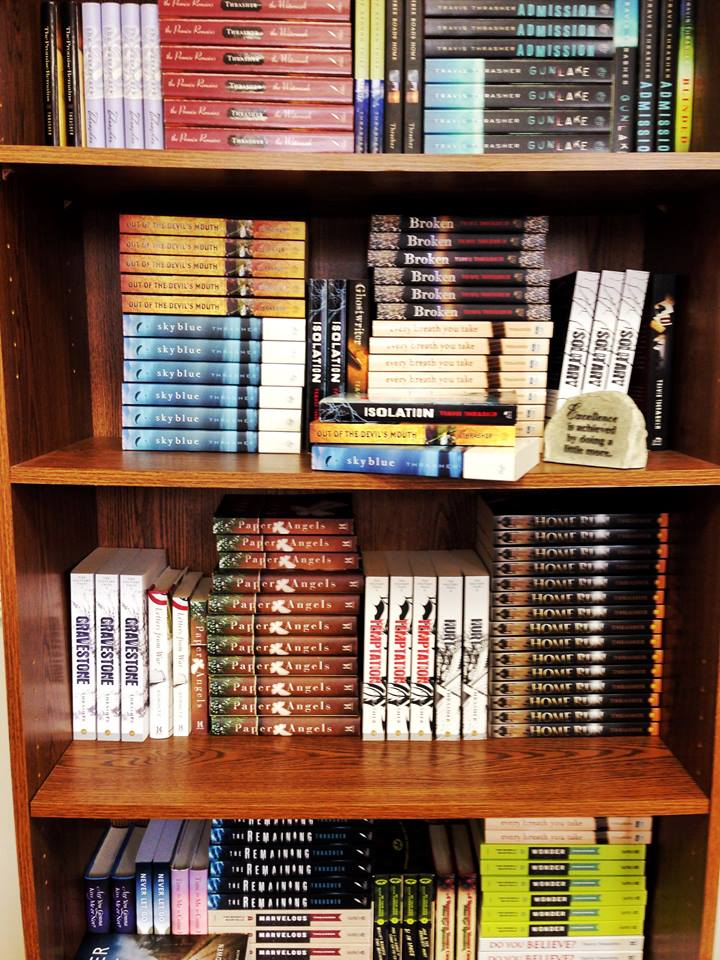 So I have a shelf of books, and I’ve been writing full-time for almost ten years.

I’ve learned in a hard way the last few years that having a shelf of books and writing full-time isn’t the be all and end all either.

God, the ultimate creator and storyteller, had to reveal that to me. He had to get it through my dense skull. You know the popular slogan from the NRA? I had the same sentiment with God and my writing: “I’ll give you my writing when you pry it from my cold, dead hands.”

I used to think that since I was writing books in the Christian genre, that I had given my writing over to God. But I hadn’t.

Writing was the one constant thing I had growing up in an inconstant life. Moving and living in places like Australia and Germany and Florida and New York. Changing schools and homes and friends and cultures. In a youth I couldn’t control, writing was the one thing I could.

In the last few years, God has repeatedly said this to me:

I GAVE YOU LIFE AND GAVE YOU THE DESIRE TO CREATE AND TELL STORIES. BUT I WANT YOU TO LOVE ME MORE THAN YOUR WRITING. I WANT YOU TO HONOR ME THROUGH IT.

God hasn’t closed the door with my writing. In fact, in some ways, things have never looked brighter and more promising. It’s a year of big change for me. It’s interesting that 1987 was the year I moved to the Chicago area right after my junior year of high school had started. 2007 was the year I began to write full-time. Maybe there’s something about the 7 years.

I’m both excited and exhausted these days. I could have never imagined years ago that I would find myself working on a historical nonfiction book. Or a children’s Bible storybook. Or a memoir with a former Saturday Night Live cast member. I’ve been learning something new every day about writing and publishing.

I know God has a plan, and I hope He can use me in ways I could never imagine. And I have a big imagination.

Those shredded books are a reminder that it’s not about me and never will be.

I try. And I’m going to keep trying with Your help.